I’m one who finds great meaning in stories that ground us as faith leaders and give rise to our work for social justice. One story for me comes from the early days of the Mennonites, found in a 17th century tome called “The Martyr’s Mirror.”

The story is told of Dirk Willems, a 16th century Christian from Holland, who on a cold night in 1569 had escaped from jail, where he was imprisoned for being a Mennonite. He was fleeing for his life.

As he ran, he came to a water canal partly frozen over. Dirk ran across it safely, but the prison guard who was pursuing him fell through the ice.

Instead of running on to freedom, Dirk Willems returned and rescued his enemy, grasping his hands and pulling him from the deathly cold water. Dirk was immediately re-arrested, and soon after, burned at the stake.

The story has come to represent, for Mennonites and Amish, what it means to fully embody love for others, including enemies, and to see each other’s full humanity.

As a young person I was entranced by the 17th century etching of Willems, hands outstretched toward his pursuer, his enemy. What does it mean to stretch out my hands to another? To a friend? To a neighbor? To an enemy? 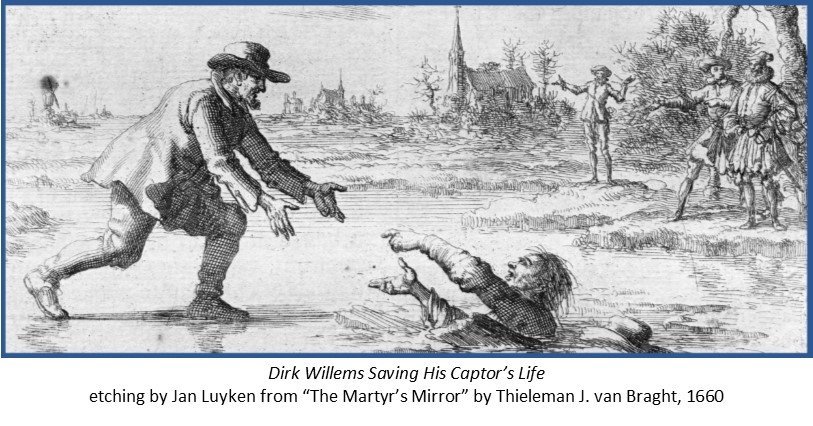 The heart of being Mennonite, and the heart of my work for justice, is to extend oneself in relationship, to offer the hand of love even when it may be rejected, or worse. The faith that grounds me calls me to see that depth of humanity in everyone, no exceptions.

What stories are part of your faith experience that ground you in your work toward justice and building Beloved Community? May the defining stories of our faith lead us all toward a better world!